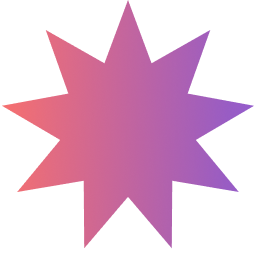 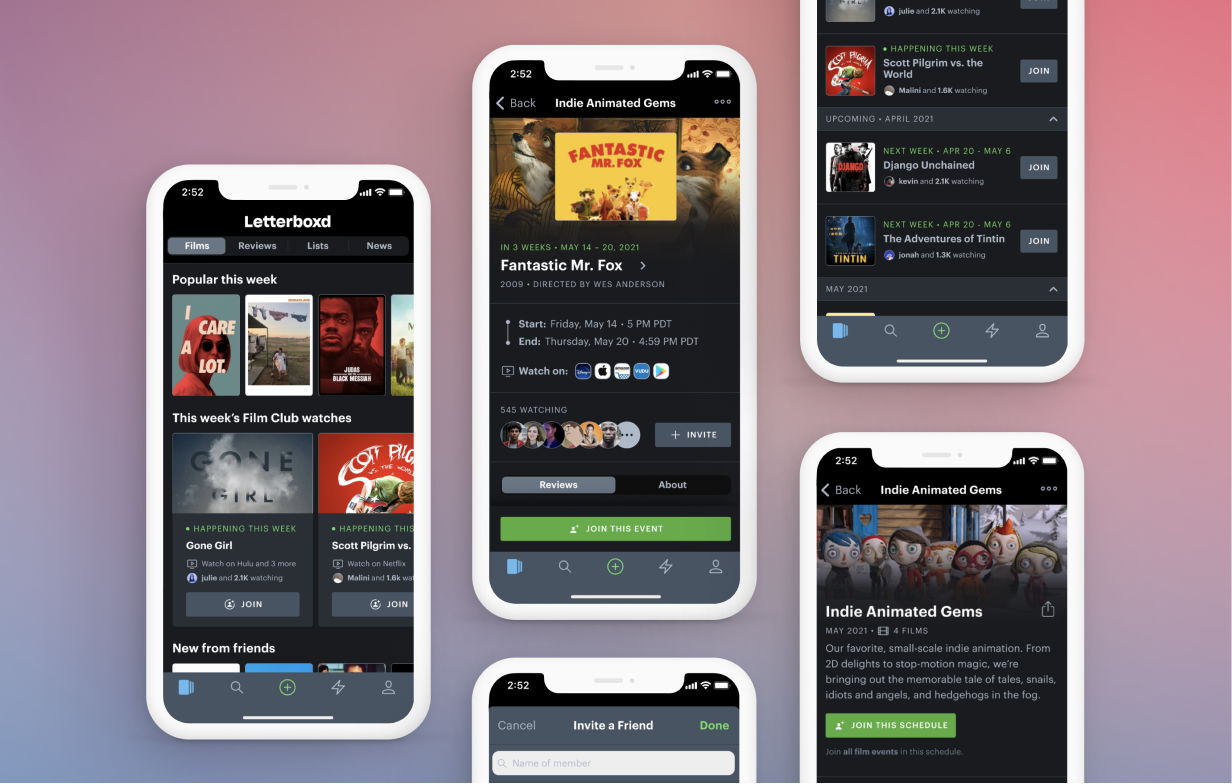 In 2020, Letterboxd’s explosive growth brought in an influx of younger, casual film fans.

Before Letterboxd, there wasn’t a social film discovery platform focused on audiences. While competitors focused on critic reviews (i.e. Rotten Tomatoes), Letterboxd gave everyday audiences a platform to review films and curate movie lists.
‍
From witty one-liner reviews to longform essays, users can interact with a like-minded film community, revolving around a core idea: the people you interact with help hone your film taste.
‍
During COVID-19, movie theaters shut down and people watched more films at home. Letterboxd's popularity skyrocketed with a 40% growth and over a million new users (Deseret News). Now, the largest user demographic is 18-24 year olds, who are mostly casual film fans (NYTimes).
The Problem →

Letterboxd is a social film discovery platform, but it's surprisingly hard to be social.

Casual film fans need greater film discovery opportunities to overcome blind spots in their film knowledge, as well as direct social functionalities to stay engaged with the community.
‍
So why is it so difficult?

Users have trouble directly accomplishing their tasks, taking extra, unnecessary steps to discover new films and socialize with the community. This causes users to leave the app to interact with the community on third party platforms instead.
The Solution →

To help casual fans access social film discovery opportunities, I integrated a feature called Film Club into Letterboxd’s mobile app. I scoped out the feature, mapped out key interaction flows, and tested the feature with real users.
‍
I also worked alongside their existing UI and created new components that adhered to their existing visual design.
Jump to solution
‍Disclaimer❗ I am not affiliated with Letterboxd. This was an academic project borne out of my passion for the platform. Thus, this project is limited by lack of access to Letterboxd's internal data, business goals, and success metrics.
BACKGROUND →

Letterboxd can’t keep up with the community features that users have been asking for.

Prior to 2020, Letterboxd’s small, scrappy team (only 8 people) couldn’t prioritize arduous development jobs. Thus, they have a backlog of planned features dating back to 2011.
‍
Despite a lack of features, Letterboxd’s users are passionate and take charge in other ways — from volunteer moderating, coding projects using Letterboxd API, and countless Reddit threads on platform suggestions and improvements. 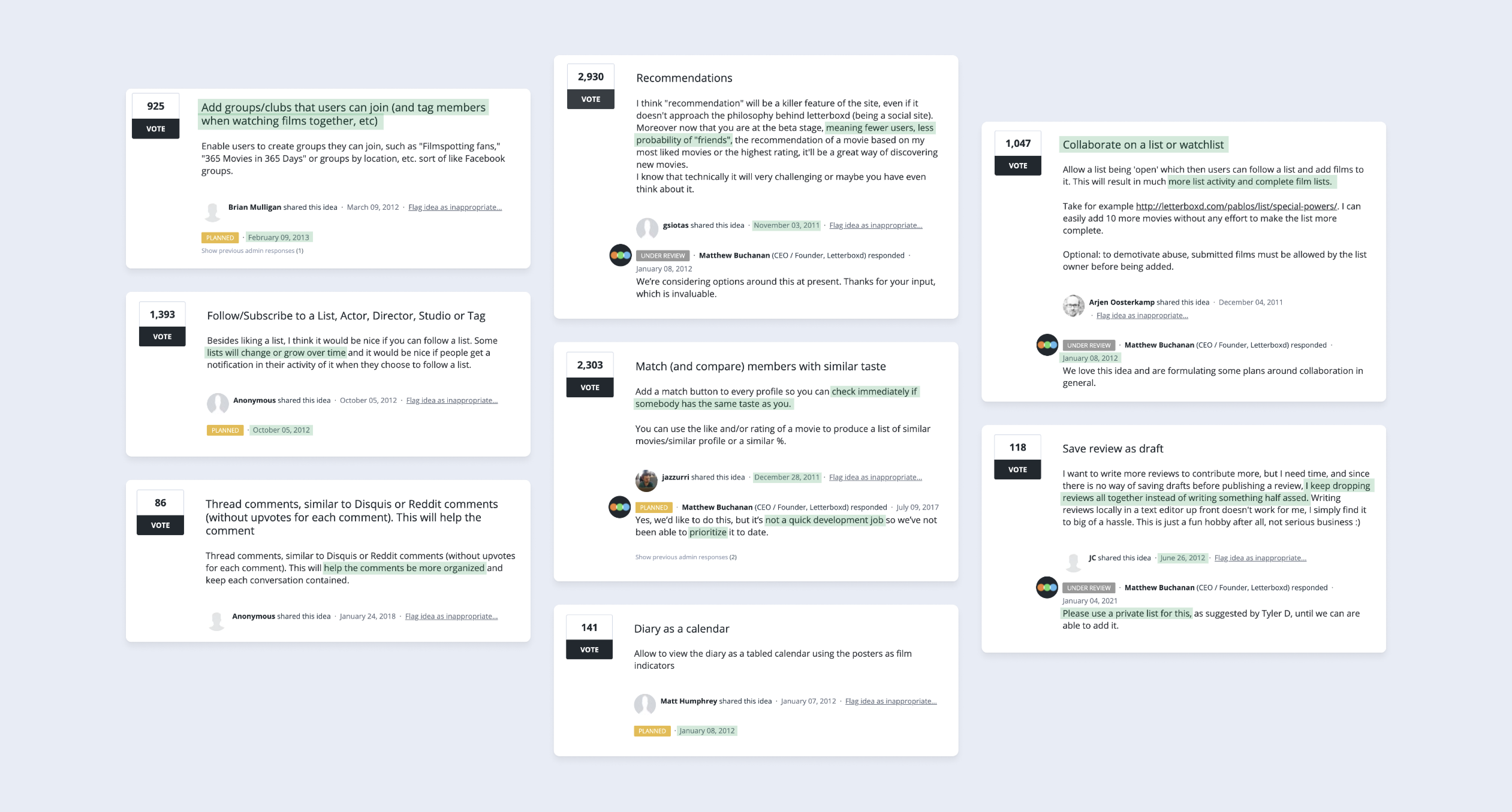 Casual fans now make up the majority of Letterboxd’s user base, and have different needs. 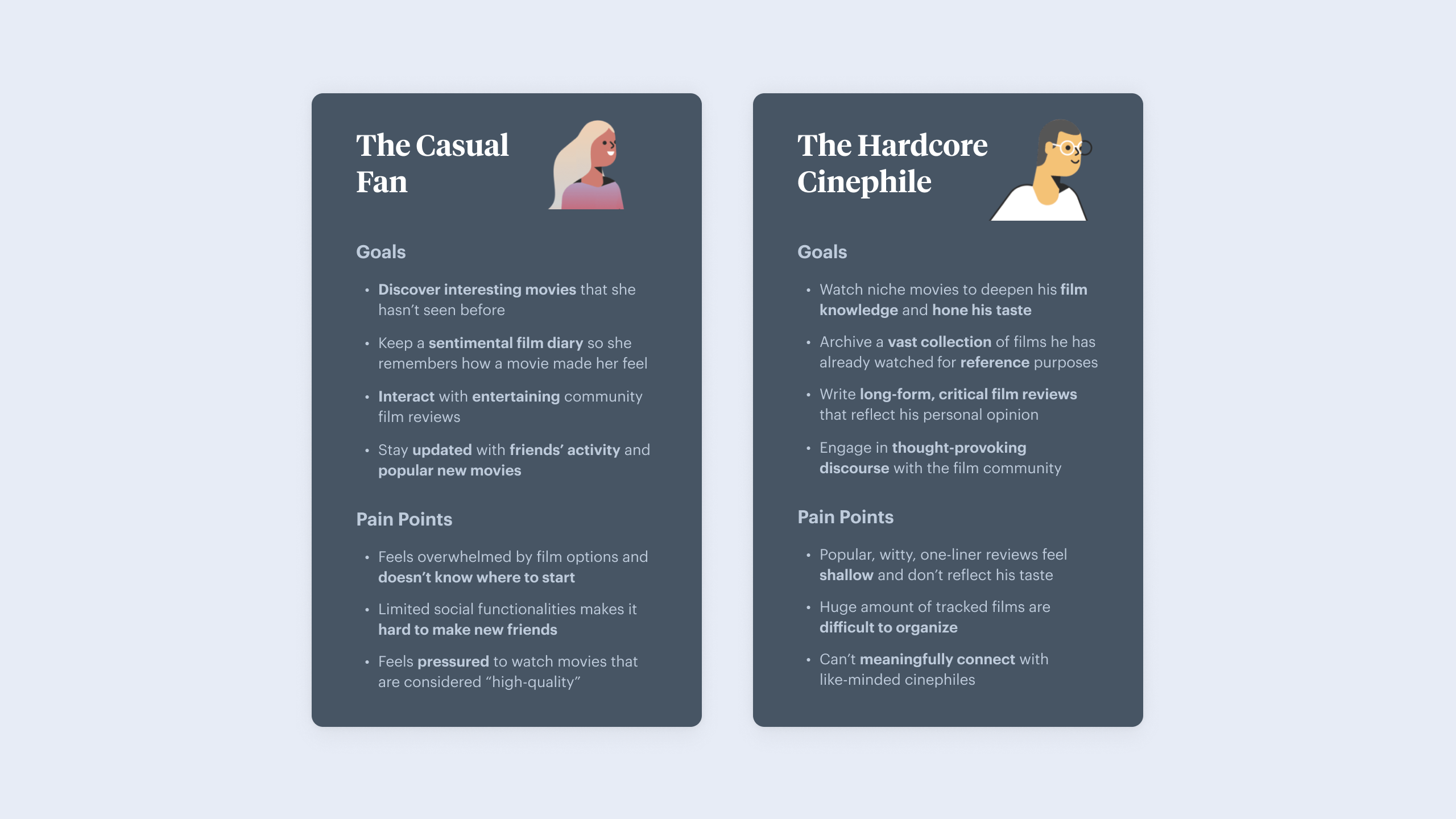 Interacting with Letterboxd’s community is intimidating and time-consuming. This makes it harder for users to discover and watch films.

I interviewed casual fans to understand their experiences with Letterboxd. My user interviews revealed these key insights:

Throughout the interviews, I discovered one common thread — users resorted to roundabout methods to accomplish simple tasks.
The Opportunity →

How might we help casual film fans discover film and hone their taste directly alongside the Letterboxd community?

Letterboxd’s drastic user growth means that their “metrics are up across the board”, with increased revenue from ads and paid members. They even “brought on several full-time staff.” (NYTimes)
‍
Now, Letterboxd has the resources to improve community features and accommodate their growing user base. Thus, based off my research, I established four design objectives:

WIth these objectives in mind, I facilitated a group brainstorming session. We voted on the ideas we thought were most effective, which included interest groups, discussion forums, and Spotify-like recommendation bundles.

Facilitating a group brainstorm via Invision Freehand
Then, I discovered that some Letterboxd users had created an in-platform Film Club. Like book clubs, users watch specific films on a curated schedule, and return to participate in weekly discussion.

As expected, it was initiated via roundabout methods. Hosted on a single profile, it took 71+ Lists, a makeshift film calendar, and a private Discord server to serve its growing community.
‍
With a whopping 700+ participants, I realized Film Club was a feature that many users were trying to create on their own, without the actual functionalities to do so. Like our voted features, Film Club brought together users with similar interests, provided a venue for casual, direct discussion, and encouraged film discovery.
‍
Thus, I moved forward, deciding to integrate a mobile Film Club feature.
‍Note❗Film Club started out with a different name: Watch Parties. This was changed after user testing — which will be explained! For consistency purposes, I will refer to the feature as Film Club. In my artifacts, Watch Parties = Film Club.

Using the MoSCoW Method, I prioritized some notable features, including:

I created a sitemap to show where Film Club could integrate into Letterboxd’s navigation, pinpointing where users would expect to access it. Some notable entry points: 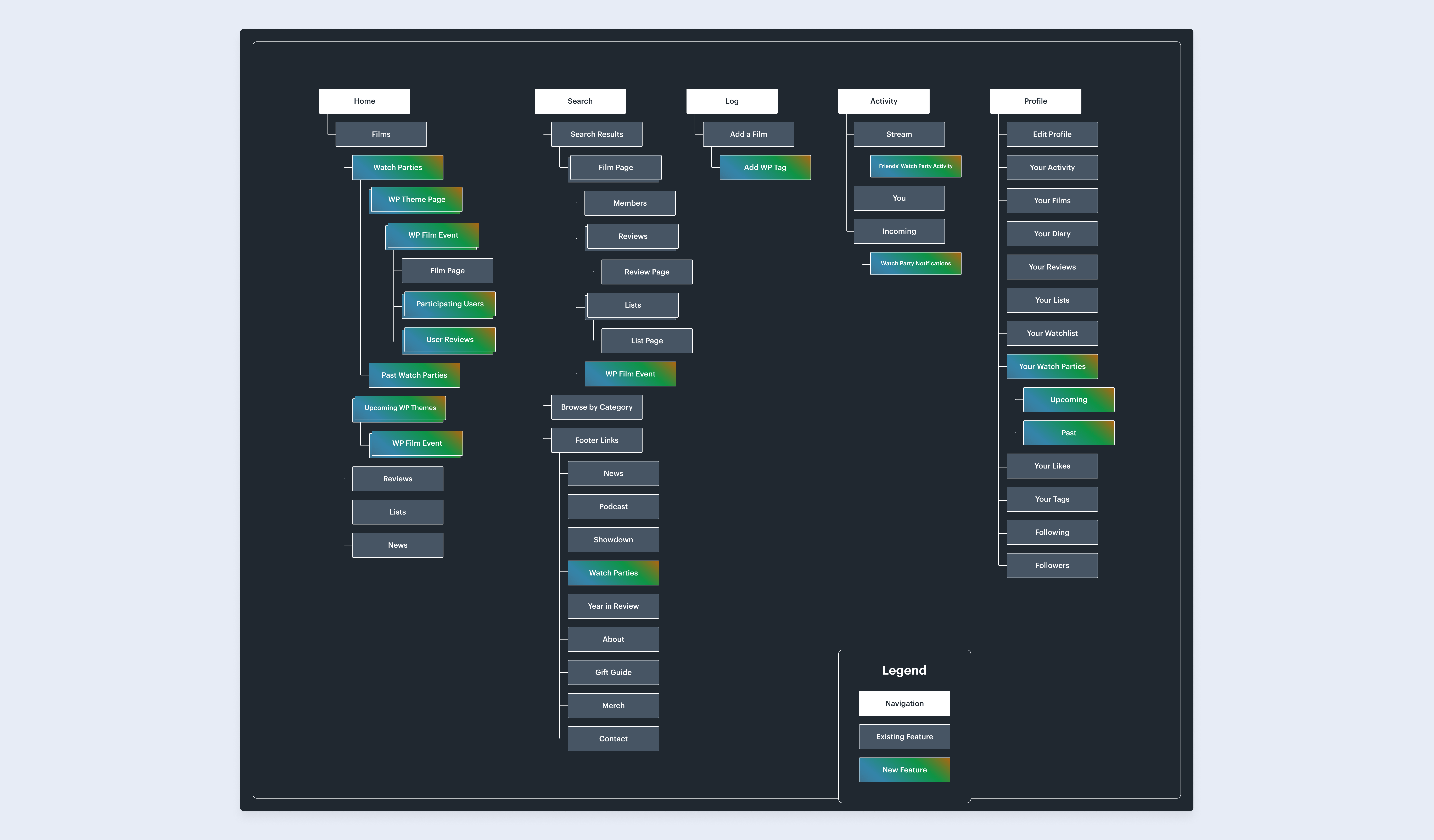 Designing key scenarios over separate time periods — from joining an event in advance, to when the event goes live

When deciding on flows to design, I created user stories to contextualize user goals when accessing Film Club, sectioning key flows into three scenarios —
Then, I created low-fidelity wireflows to account for conditional pages. Throughout the flows, I wanted to ensure that Letterboxd would help them access the events that they had opted into, without being intrusive.
‍
The Home Page was Film Club’s primary entry point. In its default state, it would provide an overview of upcoming events. If they had joined an event, the Home Page would show their personal upcoming events. This would make the events accessible and ensure users wouldn’t forget to participate, even if the event was scheduled weeks later. 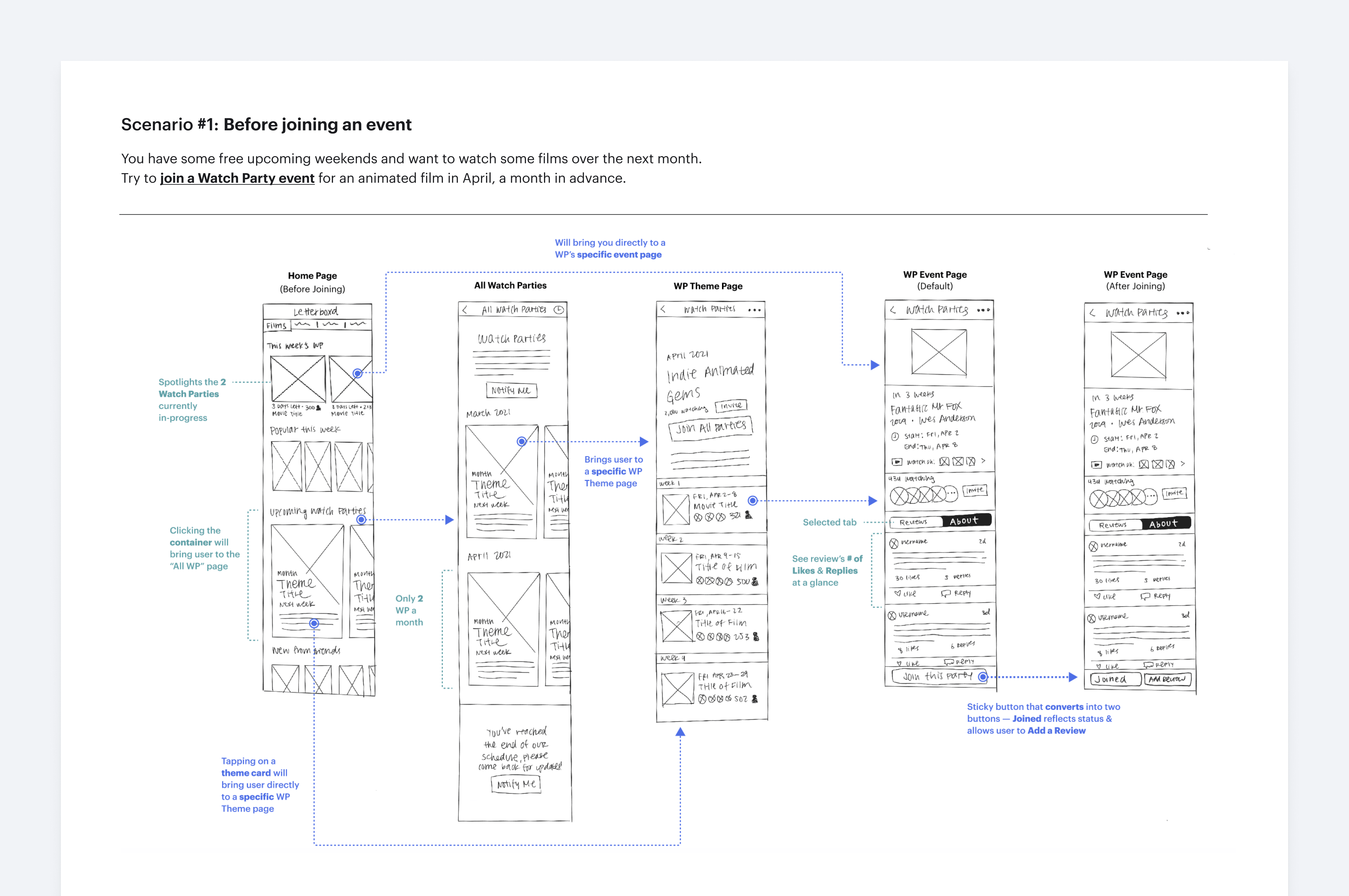 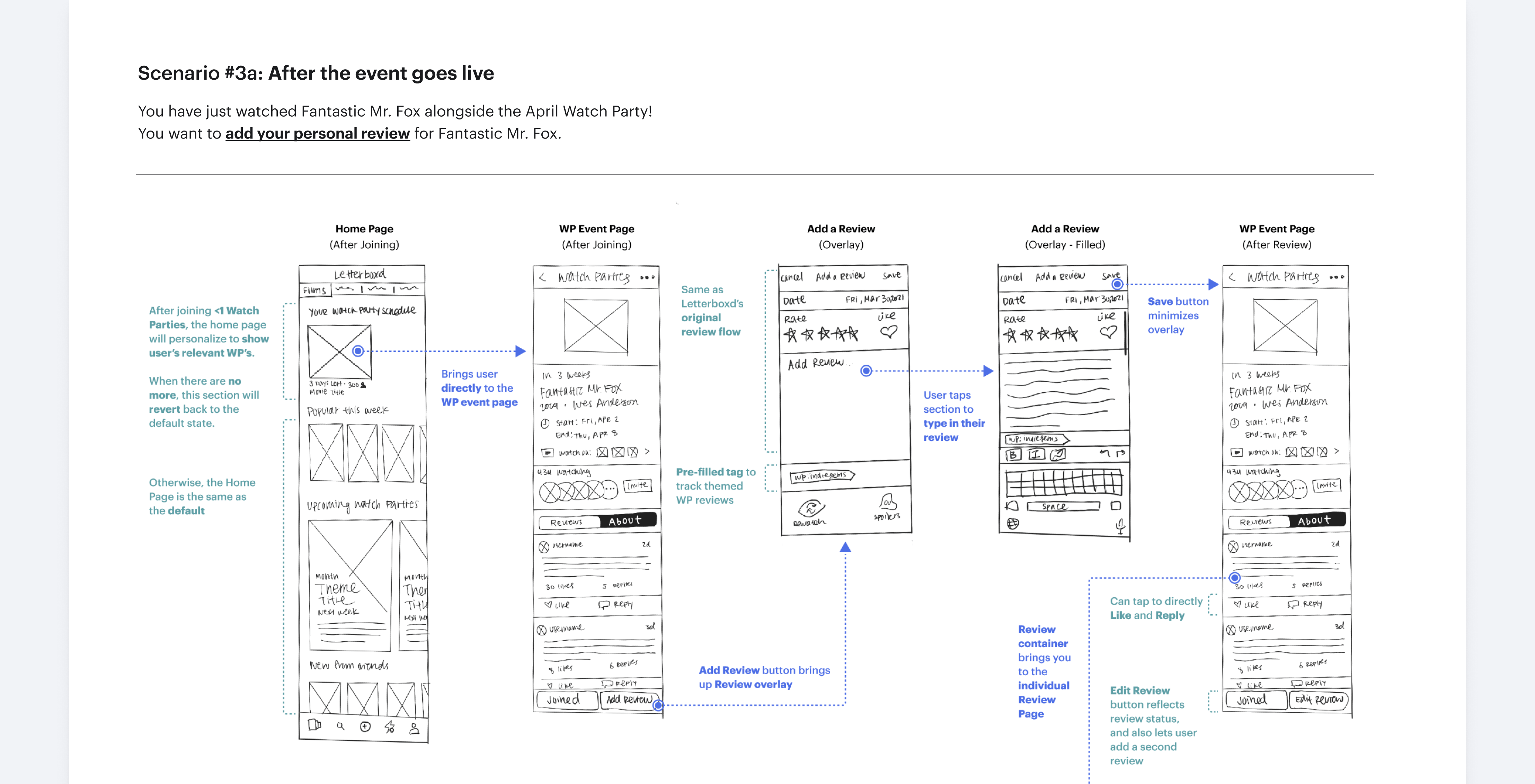 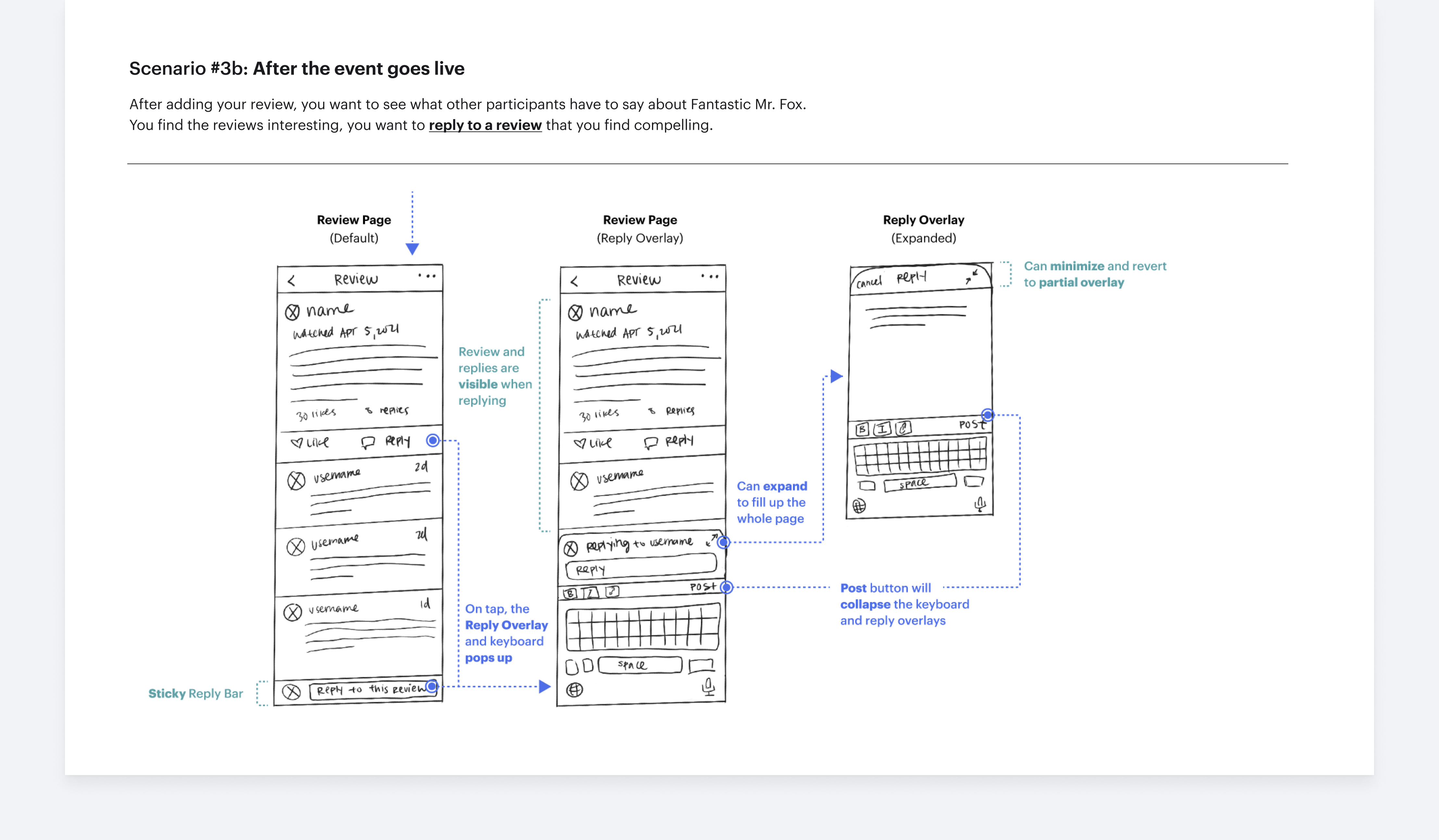 I audited Letterboxd's Design System to understand what native components I could reuse. I discovered some inconsistencies and usability issues – for example, Letterboxd’s mobile and desktop UI don’t follow a unified design language. While the desktop uses green CTA buttons, the mobile UI only uses gray buttons.
‍
When recreating Letterboxd’s mobile UI kit, I created new components only when necessary, ensuring that they aligned with Letterboxd’s brand. Button states were vital to my interactions, so I designed mobile-optimized green CTA buttons, based on the desktop UI. 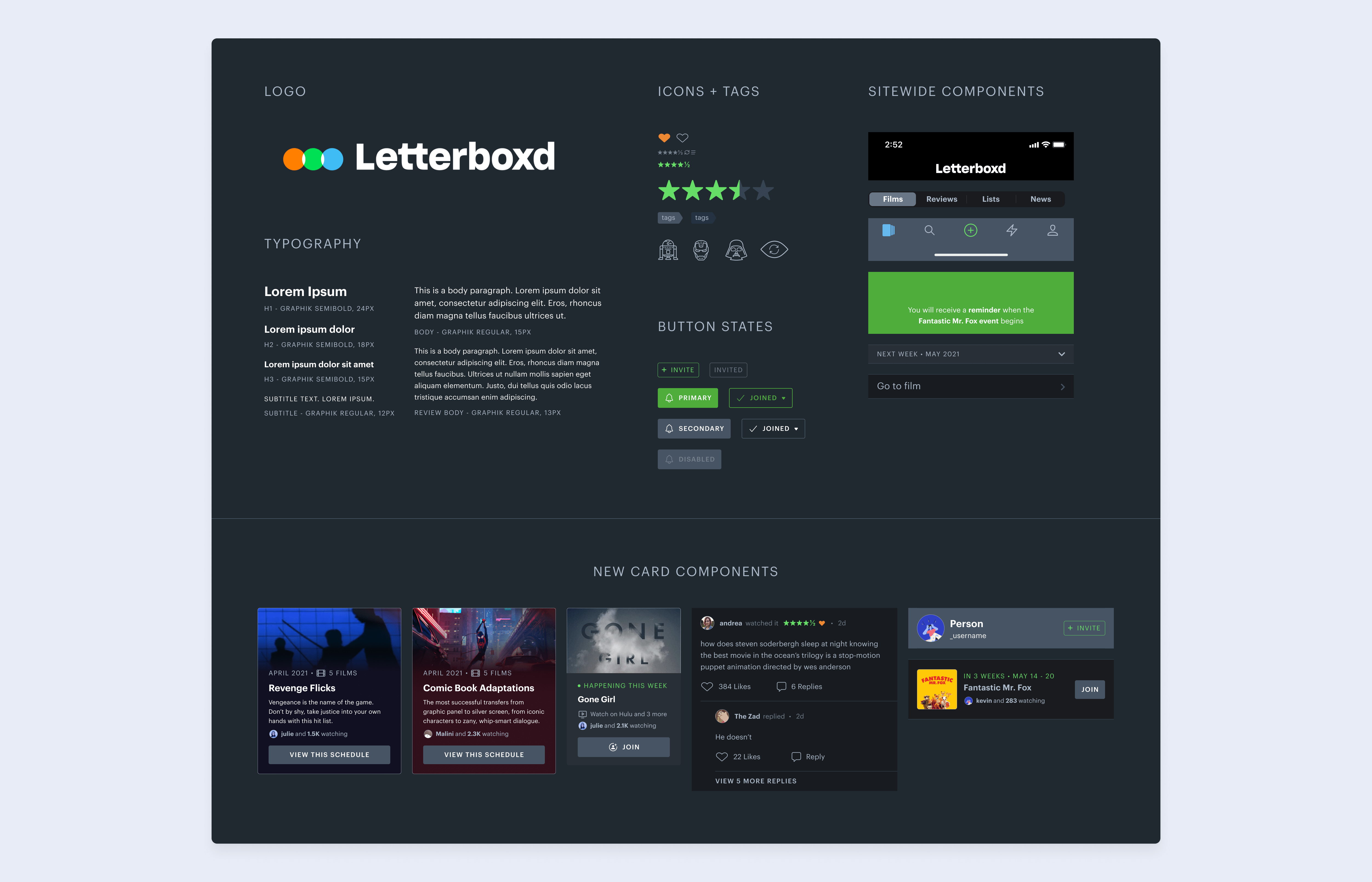 The abridged mobile UI kit
Then, I referenced my wireflows and UI kit to design a high-fidelity mobile prototype.
Prototyping & USER Testing →

I conducted moderated usability tests to see whether users could successfully explore and understand Film Club, accomplish their tasks, and if they found it valuable or desirable.
‍
To test how Film Club would hold up overall, I recruited both user types, sourcing “hardcore cinephiles” from the r/Letterboxd subreddit.

To make social interaction more personalized and meaningful, I highlighted friend participation to help users interact with friends and build their existing relationships. 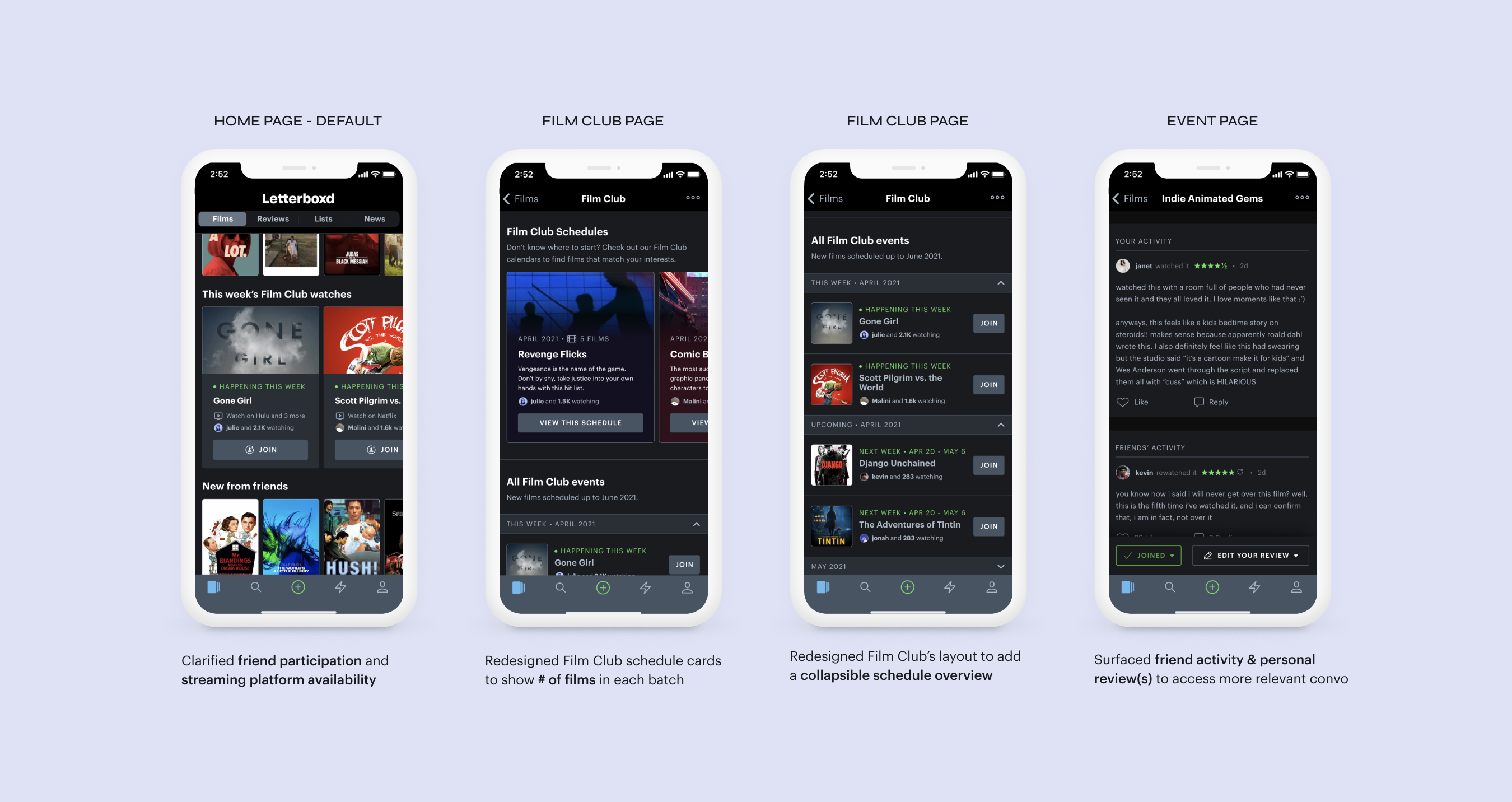 Film Club activity is seamlessly integrated into the Home tab to encourage users to directly interact with the community and discover new films.

When users have already joined a Film Club event, users can easily and directly jump into the relevant event.

There are multiple Film Club schedule options available to users, with two going on at any given time.

Thus, there are enough choices to cover a variety of user interests, but not so many choices that it will be overwhelming.

3. Plan ahead and watch film

A comprehensive schedule view of all upcoming Film Club events, scheduled out 2 months in advance. This incentivizes users to plan ahead and set aside time to watch films.

Users can also invite friends to watch specific films with them. Users can see which friends are already watching.

Seeing familiar faces will make Film Club seem less intimidating and encourage more users to join in on the fun.

Robust discussion features help users dynamically talk to one another, more often. Now, users can finally see all “Likes” and “Reply” interactions at a glance, acting as activity signposts to help them casually participate in conversations.

Friends’ activity is floated to the top so users can quickly interact with them and meaningfully connect with them.

Film Club reviews are a part of the wider review ecosystem. An automatic Film Club tag is added to the usual review flow, but helps auto-populate reviews in the Film Club event pages.

This way, users can keep track of Film Club watches, just like any other film.

You can also check out the full prototype below.
View the prototype
Final thoughts →

This was definitely my most challenging, complex project yet. However, as a frequent Letterboxd user myself, it was gratifying to work so closely with one of my favorite apps.

If I had more time, I would:

Letterboxd’s UI could use some improvement; however, for the sake of time, I reused some subpar components (i.e. the review’s modal-within-a-modal). For the most part, I avoided arbitrarily following not-great patterns by auditing Letterboxd’s UI to ensure Film Club could stand on its own. While it would’ve been easier to choose an app with less existing usability issues, this project made me a more discernible designer — a blessing in disguise.

🔖 Feature naming is an art

Film Club is a feature unique to Letterboxd — there wasn't an exact replica on competitor apps. Thus, using an existing, standard name (i.e. “Groups”) would have only misled users. The solution was to make the name distinctive — like Atlassian’s team said, “the more distinctive a name, the less it relies on context to prop it up.”

🤝 The strength of communities

I was awed by the creative lengths that users took to interact with each other. What other platform's usability issues become embedded into the social culture? (See: the faux-friend tags.) Despite any UX pitfalls, the community’s persisting enthusiasm illustrated the joy that Letterboxd brought the film community.
Back to top

You can find more of my work below.

Thanks for stopping by ✨

Dang, you've reached the bottom! Feel free to reach me at cindyrosechen@gmail.com if you want to work together, swap playlists, or just chat.